Home » NEWS » NEWS » Milan Mobility: within the Top 10 in the World 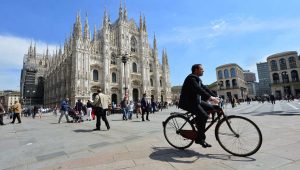 Milan mobility, according to the US multinational strategic consulting firm McKinsey, is among the best 10 cities in the world.

Since 2012, with the introduction of “Area C”, traffic in the city center has decreased significantly. Consequently, it has reduced the incoming cars in Milan every day.

In addition, car sharing and bike sharing have also contributed to reducing traffic in the city. It also facilitates the work of Taxi Milan and taxi Malpensa and increases the Milan mobility.

The interviewed citizens also appreciate the railway service. About 10% of them have already given up their car ownership and around 9% will do so in the next years. Therefore, it will bring an economic advantage to both the Milan Malpensa Driver Rental and the Taxi Milan.

Please note that, more precisely and according to this recent study of the company McKinsey, the public transport is great. In fact, rental with driver Milan and Malpensa ranked in fourth place. The same goes for the private transport, so Taxi Milan and taxi Malpensa that ranked in the sixth place.

What are you waiting for? Book and check the efficiency of your private transport with Ros Black Taxi.